Pioletti, Pioletti, & Nichols is a successful bankruptcy law firm in Illinois processing hundreds of leads per month.  The following case studies illustrates how our chat service helped grow their firm even more.

Bankruptcy law firms have a high customer turnover and therefore require a constant flow of new leads and new cases. At the same time, it is a highly competitive field of law, as in almost all circumstances only one firm will be given the chance to support the client.

Therefore every potential client that lands on a bankruptcy firm’s website is HIGHLY valued, as once a client chooses their firm every other firm misses out, without even having their hat in the ring.

This is why bankruptcy law firms spend so much time, money and effort on maximizing traffic to their website.

This perfectly encapsulates Pioletti, Pioletti, & Nichols  – they were driving thousands of visitors every month and were seeing good results. However they also know the conversion from visitor to case could be better.

This is when they were introduced to Juvo Leads “chat” offering.

Pioletti liked the fact their site could have live chat, they especially liked that their chat would be manned by real humans (not bots) and that every potential client would be qualified to Pioletti’s standards via the chat agents.

“More chat leads than I would have thought.  I’m impressed by the amount of leads we got.  I highly recommend running an A/B test with Juvo Leads so you can see the impact from chat yourself.”

Once it was decided Pioletti wanted to try out Juvo Leads chat and wanted proof they would have more leads and cases overall – they were worried it might simply take away phone call and form fill leads – in which case the firm would be no better off, having the same number of leads, they would simply come from a different source.

It was at this point Juvo Leads suggested a test to A/B split test for the the website. With half given a chat option and half no chat option.

Group A: visitors would have the option to call, fill in a form OR engage with Juvo Leads live chat agents.

Group B: visitors would have the option to call or fill in a form (like normally)

The winner would be the group with the most leads, ie calls + forms + chat leads.

Well the data speaks for itself:

Not only did Group A have LESS VISITORS, it had MORE NET LEADS. Therefore Pioletti chose to use Juvo Leads chat moving forward as they saw that, while it did reduce the number of call and form leads individually, the net result was a GIANT 59% more total leads for the firm.

Another way to look at the data: 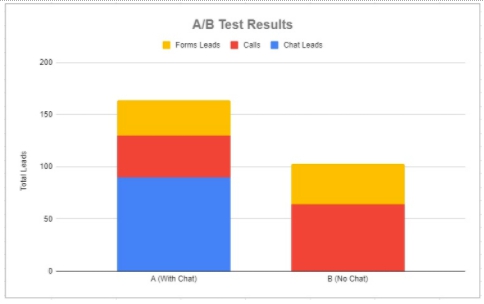 Group A (chat group) earned 164 leads and group B (no chat group) earned 103 leads.  Group A earned 59.22% more leads than Group B.  While 28% of phone and form leads were cannibalized by chat, the 61 additional leads more than made up for it.

Some of the reasons why:

Pioletti was thrilled with the additional leads, and saw how Juvo Leads Chat paid for itself multiple times over.

If you are interested in rolling out an A/B split test to find out how many more leads you get with Juvo Leads Chat please schedule some by chatting with our agents today.